Andrés Manuel López Obrador, President of Mexico, has recently stated that the drug prohibition in Mexico is “unsustainable” and proposed drug decriminalization in the National Development Plan for 2019-2024. The Mexican president said that the war on drugs unnecessarily endangers the public through drug-related violence. The plan proposes that drugs in Mexico be decriminalized and for negotiations with the U.S. and the UN occur to discuss the idea of decriminalization. Resources previously used to combat drug use would then be used to treat the drug problems in a nonviolent manner.

This plan comes in sharp contrast to his predecessors’ drug war policies. In 2006, President Felipe Calderon began the war on the cartels by deploying 6,500 soldiers to Michoacán to battle the drug cartels. Throughout his term, tens of thousands of soldiers were deployed to fight the cartels. During his six year term, twenty-five of the thirty-seven major drug kingpins were killed or captured. However, this success came at a heavy cost. 120,000 homicides occurred during his reign, which is almost twice the number of homicides during the reign of his predecessor. In the year before he took office, 2005, there were 9.3 homicides per 100,000 people, according to Council on Foreign Relations. The year before he left office, 2011, had 23.5 homicides per 100,000 people.

The next president, Enrique Nieto, decided to focus less on capturing and killing kingpins, and instead tried to reduce violence against civilians. He criticized his predecessor's policy for causing the splintering of many cartels, resulting in up to 80 new cartels that were more violent than before. Despite this, Nieto still relied heavily on the police and military to combat cartels. His term ended with a record-breaking 25.2 homicides per 100,000 people, according to the Council on Foreign Relations. During the Mexican drug war, 37,000 people have gone missing. The Mexican government is frequently criticized for human rights violations such as the 37,000 missing individuals, torture, and unlawful killings.

However, the drug war is not only an issue in Mexico. In the United States, the war on drugs has long been a controversial, expensive issue.

President Richard Nixon began the war on drugs in 1971. That year, the budget for the war on drugs was 100 million dollars. Since 1971, over a trillion dollars have been spent by federal and state governments to combat drugs. Also since 1971, the number of DEA agents has increased from 1,470 to 5,000. In the United States, Sunshine Behavior Health states that 1.25 million people are arrested for drug use, possession, or sale every year. This means that every 25 seconds that pass, one citizen is arrested for a drug related charge. According to FBI records, approximately 82 percent of those drug arrests are merely for possession. Over 400,000 people are behind bars in the United States for  drug charges, according Monarch Shores. Each one of these inmates costs the taxpayers up to 30,000 dollars a year. The United States’ war on drugs is largely responsible for its massive incarceration rate. According to Matador Network, despite making up 5 percent of the world’s population, the U.S makes up 25 percent of the imprisoned population. 25 percent of these prisoners are imprisoned for drug charges.

Despite the United States’ extensive and expensive measures to combat drug use, hundreds of thousands of Americans continue to die from opioid overdose. Hundreds of thousands are being imprisoned, taxpayers are paying billions, and according to the Centers for Disease Control and Prevention, drug-related deaths are increasing. Isn't there a better way to solve this issue?

It seems many people believe so. A study conducted by Pew Research Center shows 67 percent of American adults as of 2014 believe that the government should focus on treatment of drug users rather than prosecution and imprisonment. Another study, also conducted by Pew Research Center, shows that 62 percent of Americans believe marijuana should be legalized. The will of the people can be shown in the recent legalization of marijuana in many states.

Unlike the war on drugs, the legalization of marijuana has been a boost to the economy of the states which have legalized it. For example, Colorado marijuana sales reached 1.5 billion dollars in 2017. Since marijuana dispensaries were made legal in Colorado, this number has only been increasing every year, as shown by the below Colorado Department of Revenue graph. 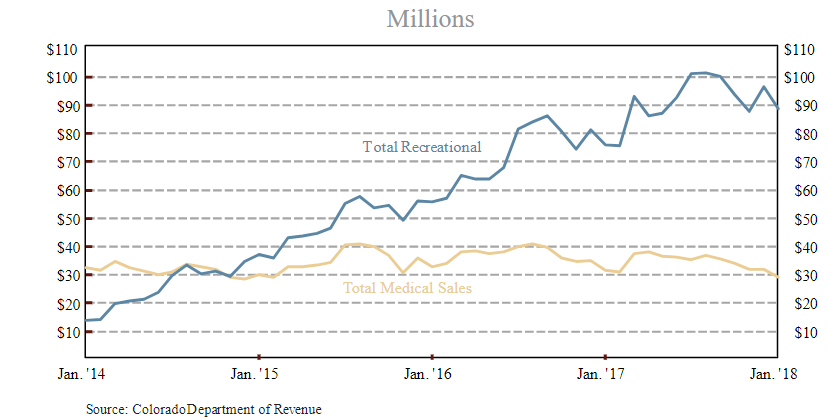 The money spent on marijuana makes up 0.55 percent of all personal consumption spending in Colorado. Colorado has also enjoyed many new jobs created by the legalization of marijuana. The marijuana industry employs approximately 40,000 individuals in Colorado. Although this number makes up a small percentage of total employment in Colorado, this industry is one of the fastest growing in Colorado, according to the Colorado Marijuana Enforcement Division. It is not unreasonable to conclude that federal legalization of marijuana, or even all drugs, would cause a surge of employment, increase of gross domestic product, and deflation.

All of the money currently spent on imprisoning the United States’ over 400,000 drug-related prisoners and all of the money currently spent on combating and regulating drug use could be placed back into the rightful pocket of the taxpayers. Nearly half a million Americans imprisoned for victim-less crimes could once again walk free. Hundreds of thousands of new jobs could be created. The gross domestic product would increase, and the stock market would boom.

Legalization would also allow for more people suffering from drug addiction to receive help without fearing for their life and freedom. This would make drug use safer and quitting drugs easier, therefore lowering overdose deaths. Legal drugs would out-compete illegal drugs in the free market due to being cheaper, which would also lower drug-related violent crime.

“How Much Does the War on Drugs Cost?” Monarch Shores, 10 Apr. 2019, www.monarchshores.com/drug-addiction/how-much-does-the-war-on-drugs-cost.

“The Economic Effects of the Marijuana Industry in Colorado.” Federal Reserve Bank of Kansas City, www.kansascityfed.org/en/publications/research/rme/articles/2018/rme-1q-2018.